{via Curbed National}
by Spencer Peterson

This September, Studio 54 co-founder Ian Schrager unveiled The London Edition, the latest of Marriott-branded Edition hotels he created in concert with hospitality firm Yabu Pushelberg, and, as with other Edition spots, and YP interiors before it, this one\’s a doozy, design-wise. Design Boom was lucky enough to get the grand tour, and its write-up describes a place whose creators know how to burnish its historical bonafides without making it a handmaiden to tradition. Take the lobby, for starters, with ornate stucco ceilings and marble surfaces, each restored from the establishment\’s earlier life as the historic Berners Hotel. It\’s got the grand and imposing air as one might expect from what used to be an Edwardian Era London standby, but with enough modern touches to imbue it with a bit of an edge. You enter through a glass vestibule, and the first thing likely to catch your eye is a large mirrored orb of polished silver hanging from the ceiling, a rather arresting installation by lighting artist Ingo Maurer. As Design Boom puts it, Schrager\’s latest hotel \”is no period piece.\”

Seating up to 140 guests, the Berner Tavern Restaurant has two custom-built chandeliers inspired by NYC\’s Grand Central Station, and walls hung with a curated series of portraits, landscapes and still-lifes. Guardian restaurant critic Jay Rayner took issue with it being dubbed a mere tavern, writing that \”the ceiling is so high you could fly a kite in there, as long as you didn\’t chip the Georgian roses. There\’s acres of polished wood, a clutter of dodgy art and chandeliers like crystal tits.\” But we\’re not here to argue semantics. 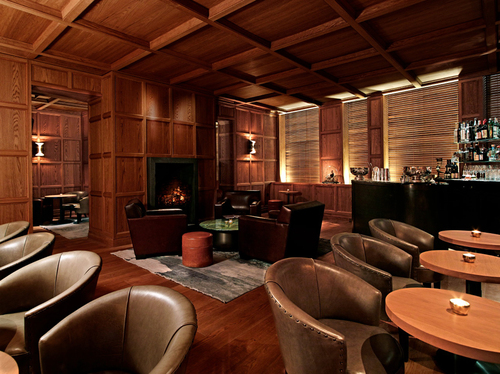 Nestled at the back of the hotel is the Punch Room, an oak-paneled throwback to London\’s 19th-century private clubs, where the walls are lined with tufted banquets of teal velvet and every drink is literally brought to you on a silver platter. All it needs is a thick haze of tobacco smoke for ambience. 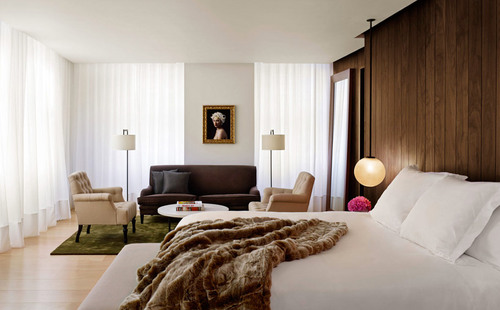 The 173 guest rooms come with oak floors that lend it a subdued, den-like feel. This one sports an oatmeal-upholstered George Smith lounge chair and a golf-leaf baroque-framed photograph by Hendrik Kerstens. Head over to Designboom for more of The London Edition\’s classy nooks and crannies.